I’m sure you’ve heard many great stories about masterpieces & lesser works of art being purchased at garage sales, thrift shops, auctions & other non-gallery-like places, sometimes for literally pennies on the dollar. While it can be an exhilarating experience for the finder, it can also be a bit of a blow to the ego of the creator of the bargain artwork. As an artist on the creator end of the deal, I personally believe it adds value & an interesting back story to a wandering piece of art. 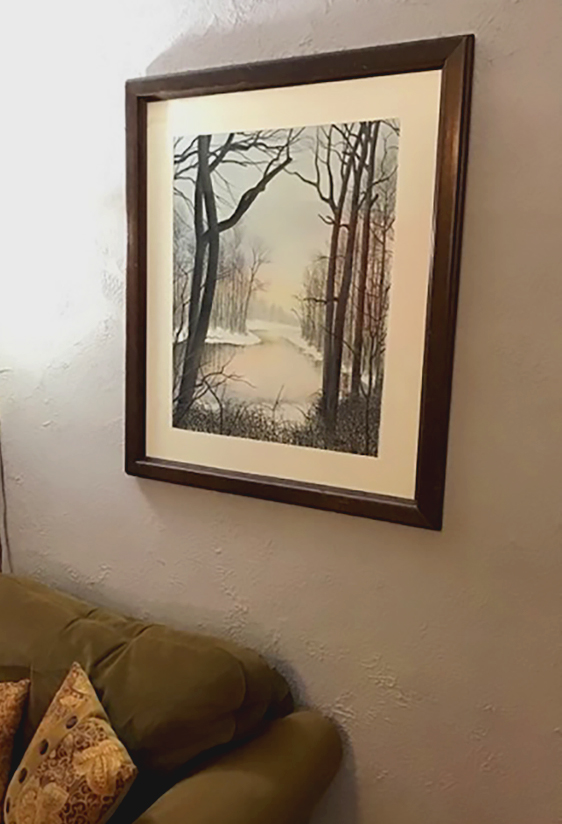 Liz’s photo of her trash find

I was recently contacted by a lovely woman (named “Liz”) from Utah who wrote to inquire about a rather large piece of framed art she had rescued from someone’s trash, that she believed to be one of my works. Initially my heart sank at the thought of any artist’s work facing such a fate, but at the same time I was thankful for observant art lovers like Liz who saved the work from certain landfill extinction.

Liz filled me in on the details of her find, writing that she had discovered the art one rainy day in 2014 on her way to church, saving it before any rain had damaged the art. She later packed it up for a move from Pennsylvania to Utah in 2018 when she & her family relocated. She loved the artwork & it was a special reminder of all their time living in PA. She also provided me with photos of the once homeless Pen & Ink drawing that took up residence in her home, in hopes I could provide the story behind it.

“When moving to Utah, we could only take a number of items, but decided to take these beautiful trees as it reminded us of Pennsylvania”

What’s In A Name

I always sign my original artwork, but unfortunately my signature was hidden among too much line work in my drawing on Liz’s acquisition, making it hard for her to track me down. Quite honestly, anything short of microscopic analysis, I don’t think I would have deciphered my own name on this piece. But lucky for me, she persevered & solved the puzzle of my signature, googled my name & contacted me, which sparked a conversation between us.

“After much debate & angling of light, we were finally able to make out your last name of Colsher”

Based on photos Liz provided, I was able to confirm that her trash pick was indeed one of my creations titled “Reflections”, which dated back to the 80’s when I transitioned from a graphic artist in advertising to a full time fine artist. Given its age, I knew I would have to do some digging in my archives to answer some other questions she had about it & I was just as interested in hearing more details about that fateful day when my art was saved from the rain & possible extinction. 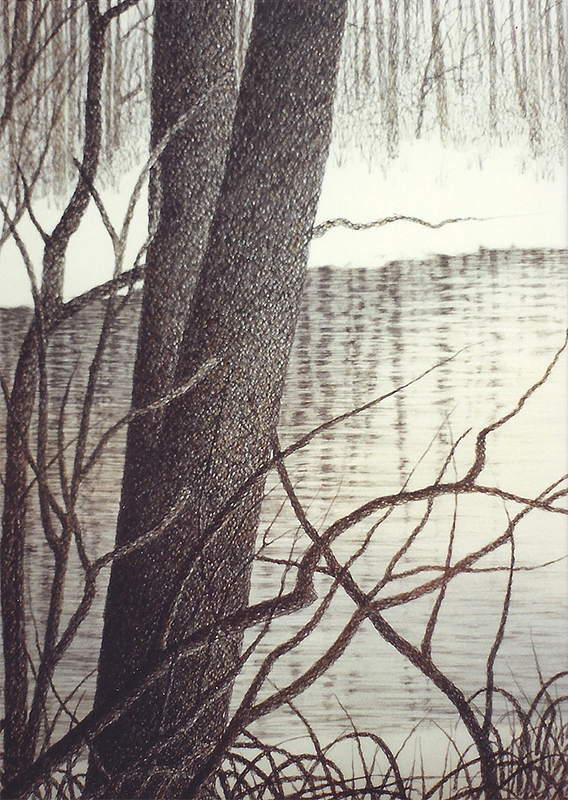 “Reflections” Of The Past

My love of art began with childhood doodling in schoolbooks during Algebra class (which may explain my poor math skills to this day), that eventually evolved into actual artworks created with grown-up artist materials. Although never my intention, my doodlings & paintings of Elton, The Beatles, & other music giants of the day, somehow bloomed into a very small cottage industry as my friends & others sought to own them. A few of these “artistic gems” have resurfaced through reunions with childhood friends who feel they may have gotten a deal, but for me, seeing these renderings is an eye opening reality check on how far I had to go as an artist, & the journey is ongoing. So reuniting with Liz’s trash find was a revelation in a number of ways & revealed my early attraction to intricate line work which would ultimately lead to my love of the etching process.

I’ve always had a love of Pen & Ink, & during the time I created this piece I was into doing large scale works which were exhibited & sold through a local gallery. After receiving additional details about the art, I dug through my records & sent Liz my findings. I was able to determine that “Reflections” was one of a number of large works created in 1987 & purchased by a corporation from the gallery when I began my career as a full time fine artist. Many of my works have been sold through galleries & I’ve had the pleasure of meeting some of the collectors over the years, learning how & why they connected with my work & where they acquired it.

Liz’s “Reflections” is still in its original frame & she believes (judging from some of the other discarded items nearby) that her art met its trash-like fate due to the previous owner’s death. Also the location where she discovered it seems to differ from my records of the original purchaser, so I can only assume it’s been on quite an adventure in its 30 year lifetime.

The Rest Of The Story

Liz’s trash find could have easily been overlooked by who knows how many people on that rainy day in 2014, but for some reason she felt a connection & was compelled to rescue my art & has been enjoying it ever since. No doubt I invested quite a bit of time & creative energy when I created it back in 1987, but the main motivation behind creating art is more about the personal meaning a piece of art can bring to another person. It may seem a bit overly sentimental, but reuniting with a piece of art I created over 30 years ago is particularly heartwarming & stories like this make being an artist so much more rewarding. It’s possible more of my work may write home from thrift shops & dumpsters in years to come, but should they end up as this piece did, I’ll be grateful that its story was given a second chance to go on to be enjoyed & treasured by its new owner.

In my final correspondence with Liz, we thanked each other for exchanging stories about the life of “Reflections”. She also told me that her two daughters wanted to be art teachers, to which I replied “tell them art is a very interesting & rewarding profession to pursue, as proven by this story”.


Thanks to a collector for prominently displaying m

Varnish on a painting is like frosting on a cake.